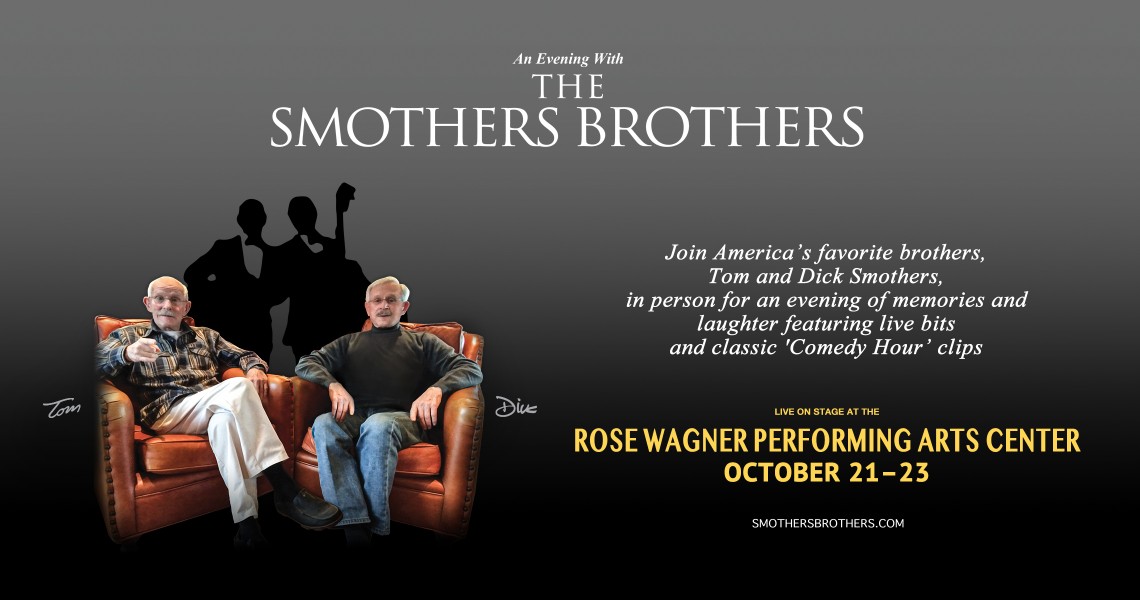 Due to an abundance of caution regarding ongoing health issues, THE SMOTHERS BROTHERS, Tom (85) and Dick (83), have cancelled their remaining dates for the 2022 calendar year and will look to reschedule these shows in the new year.

Live at the Eccles Presents THE SMOTHERS BROTHERS October 21, 22 & 23, 2022 at the Rose Wagner Performing Arts Center downtown Salt Lake City. ArtTix is the official source for tickets for Live at the Eccles Events.

The Purple Onion, San Francisco, 1961: Who would have guessed at their debut, these new kids in town, The Smothers Brothers, would soon command the number one TV show in the country, introducing a theretofore tame medium to its true potential for social and political commentary.

A folk duo with a comedic edge, the brothers had begun performing together while at Santa Clara University. With a style that set them apart from both music and comedy, they quickly gained a following that led to their break out performances in San Francisco.

The half dozen years following saw a solid string of hit records, TV appearances, even a brief sitcom, The Smothers Brothers Show. But it was February 1967 when the curtain rose big time.

With CBS and the heavens in alignment, they launched The Smothers Brothers Comedy Hour, a mid-season replacement that immediately rose to number one edging out long time leader, Bonanza, and establishing a beachhead for topical and satirical content. TV had come of age.

Everything was there from long established stars to cutting edge rock groups of the sixties. Something for everyone and everyone was watching.

But satire and controversy in those days came with a price and, while they pushed the envelope for three seasons for all who would follow, their success was cut short by White House pressure and a contrived firing by CBS.

Once again it was time for The Smothers Brothers to take their show on the road, which they did for the next five decades, further honing their craft, performing regularly to capacity audiences at popular and prestigious concert venues throughout the country.

They elected to retire in 2010, but their recent induction into The National Comedy Center spurred their interest to return to the stage – and encouraged them to create an evening in concert consisting of musical comedy, classic video, and Q & A and schedule a forthcoming national tour of Performing Arts theaters.

The satisfaction of celebrating a lifetime of success and, once again, connecting with audiences that have always embraced them, is a priceless gift for two brothers who continue to entertain at the highest lever simply by being themselves.